GROVETON, NH 9/25/21: Groveton’s Chris Caron earned his first street stock title at Riverside Speedway on Saturday night. Caron went in to the event with a comfortable lead and finished in the 5th spot to earn the crown.Maine’s Todd Libby got his 5th win in a row on Saturday with Stewartstown, N.H.’s  Mike Humphrey coming through the field to pick up the second spot with Whitefield N.H’s. Hollywood Chan Davis claiming the third position. In the Claudette and Deans place DareDevils St.Johnsburys Brandon Sheldon got the lead early and then had to hold off young Connor Charboneau in the #6 machine to claim the win. Charbonneau ended the race with a fine second place run with Gorham N.H. Revin Evan Gilbert finished third and earning his first Claudette and Deans place point title. All the DareDevil drivers did a great job this season. The M.H.Humphrey Lil Rascals Dwarf cars had a great race to end the season. Young Miller Buzzell Battled for 7 laps with the 15 of Cody Brown and then got his #18 machine out front and hung on for his second win of the season. Four time Dwarf car Champion Eric Hall got his #2 running very well as he came from well back in the pack to get second and 2020 champ Hiram Maine’s Roger Edgecomb finished in third which was good enough to earn him his second M.H. Humphrey Lil Rascals Dwarf car championship. In the EKeys4Cars Formula Fours a last lap crash in the heat race sent young Mekaylah Bowen to the hospital to get checked out. On the last lap as the field entered turn three the #38 of Ryan Heuser and the #12 of Bowen got together with both machines hitting the turn three wall. Heuser was okay but as a precaution Bowen was sent to the hospital to get checked out. Mekaylah was okay but both cars were done for the night.The main event saw Derby Vermont's Brendan Rhoades get the lead from the #97 of Cassie Leonard on lap #9 and drove away for his second victory of the season. Point leader Bryan Putney got around Leonard and chased Rhodes to the checkered flag but had to settle for second with 2020 Daredevil champion Cassie Leonard picking up the third spot. Putney picked up his first EKeys4Cars formula four title. Bonestock 6&8 cylinder bone stocks saw a couple quick cautions, but once again it came down to a battle between the #90 of Floyd Bennett JR. and the #91 of Maine's Jamie Heath. Heath had the lead early but tangled with the #75 of Randy Fecteau and cut down a right front tire which brought out the caution. Bennett got the lead and the win, with Heath coming back for second and Fecteau finishing in
the third spot which was enough to earn Randy Fecteau his first championship. The Bad Boy Mowers of Morrisville 4 cylinder Bone stocks main event had two and three wide racing throughout the field. Young Julian Kenison got the lead at the halfway point of the race and then raced side by side to the 29th lap with the #72 of Cody Hodge. The race was a barn burner but on the white flag lap in lapped traffic the leaders got together and other lap cars involved it took the scorers a few minutes to figure out the finish. In the end Garrett Labounty picking up the first place trophy With the #99 of Marty Barrup finishing second and North Stratford’s Jimmy Hurley getting third. Winning the season long championship was Maine's Nick Ogden in the #9. This coming week it's the two day Fall Brawl with the Bad Boy Mowers Four cylinder and 6&8 cylinder Bone stocks on tap Friday along with M.H. Humphrey Lil Rascals Dwarf cars. Then on Saturday the SMAC 350 Super Modifieds along with the R. N. Craft street stocks. The EKeys4cars Formula fours and the Creative Counters Late Models. Post time on Friday is 6 P.M. and Saturday post time is 1 P.M. Hope to see you there. 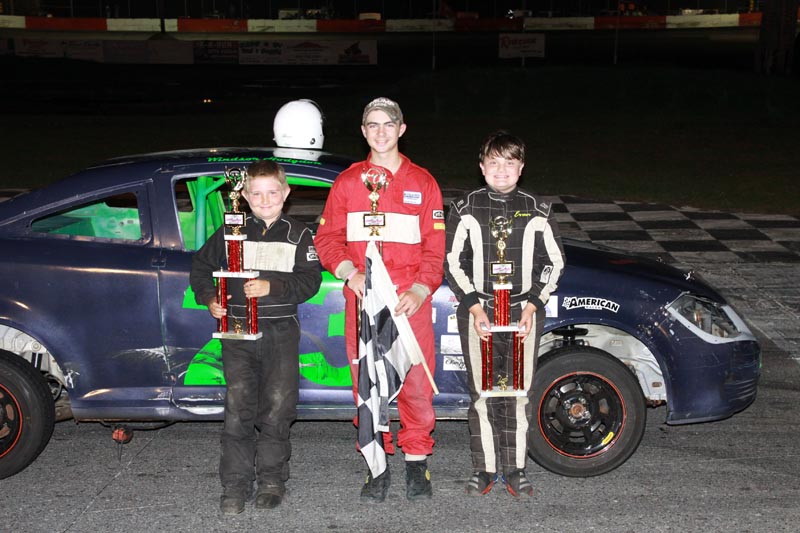 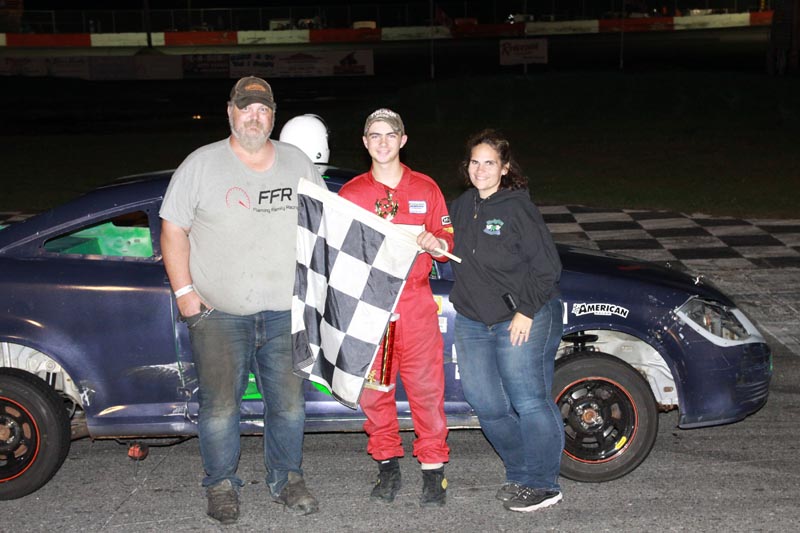 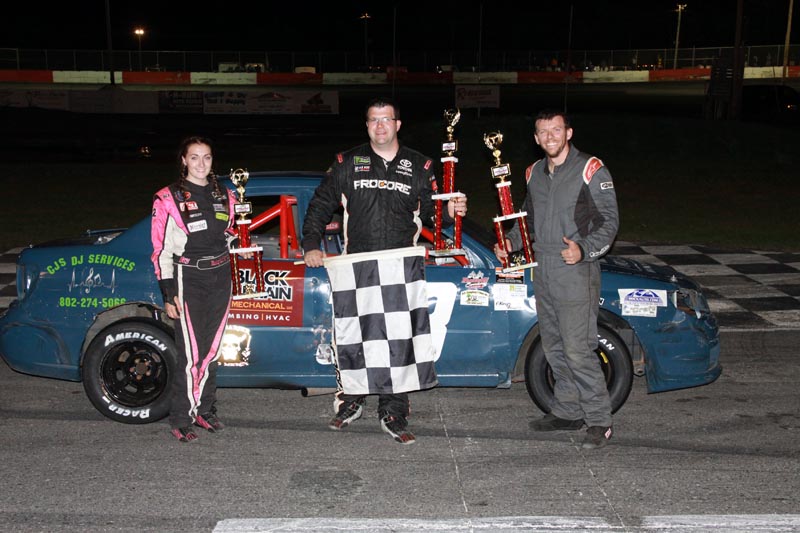 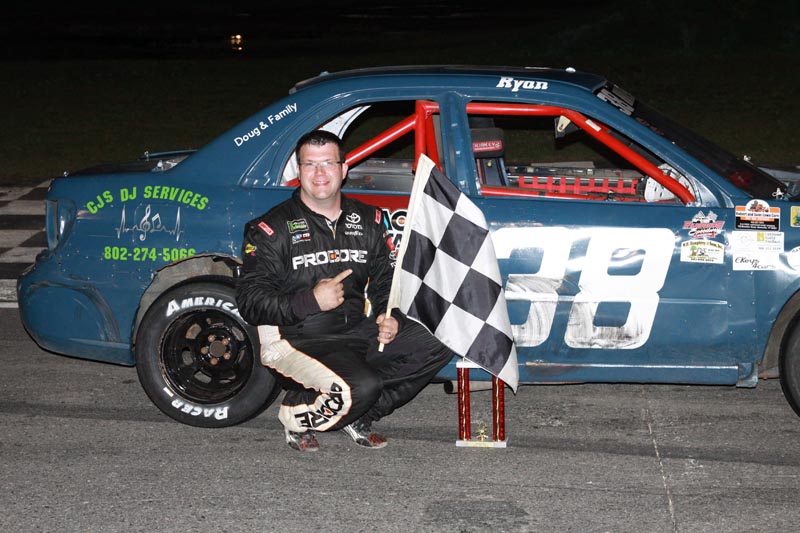 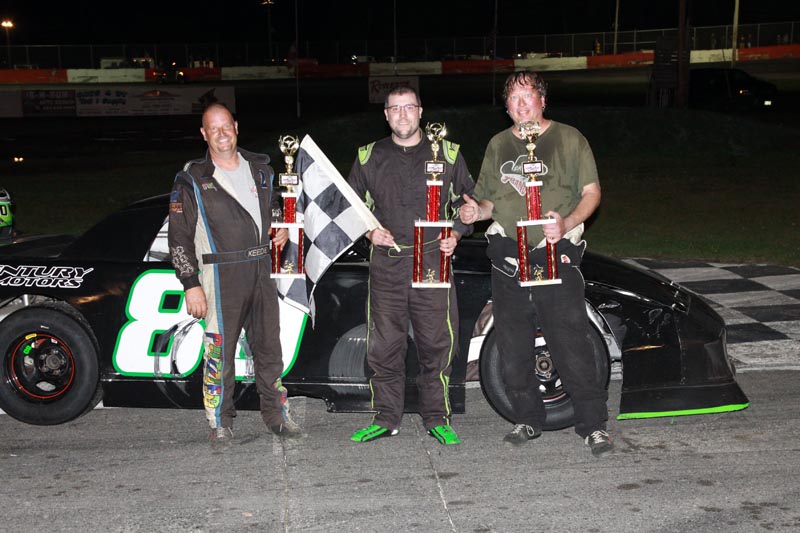 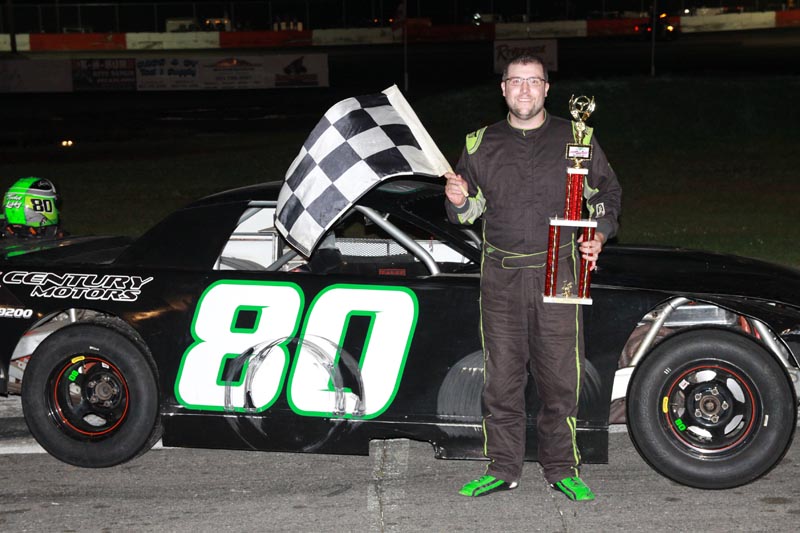 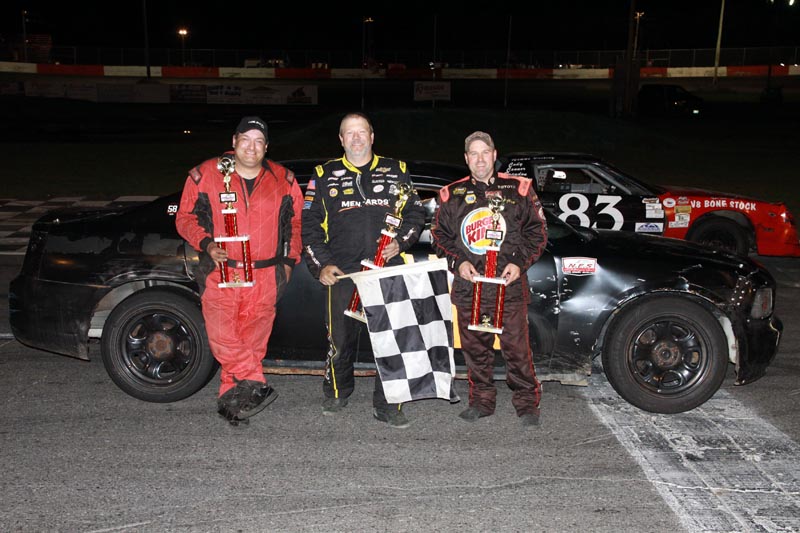 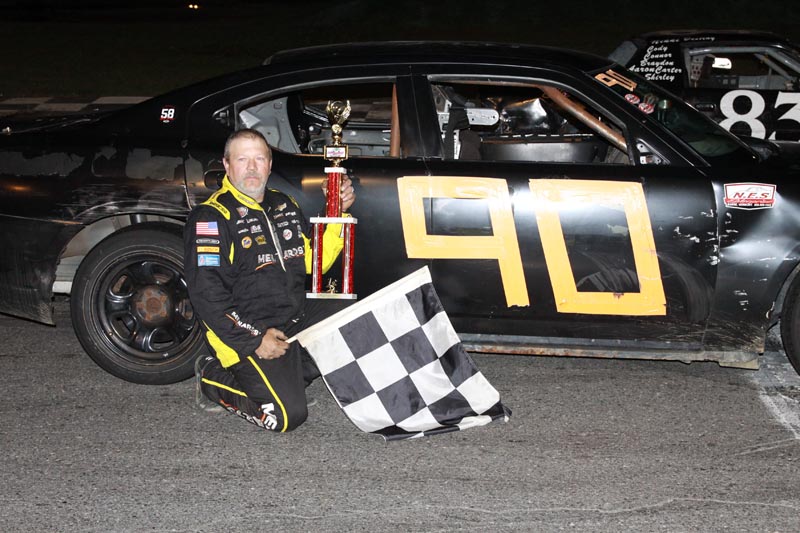 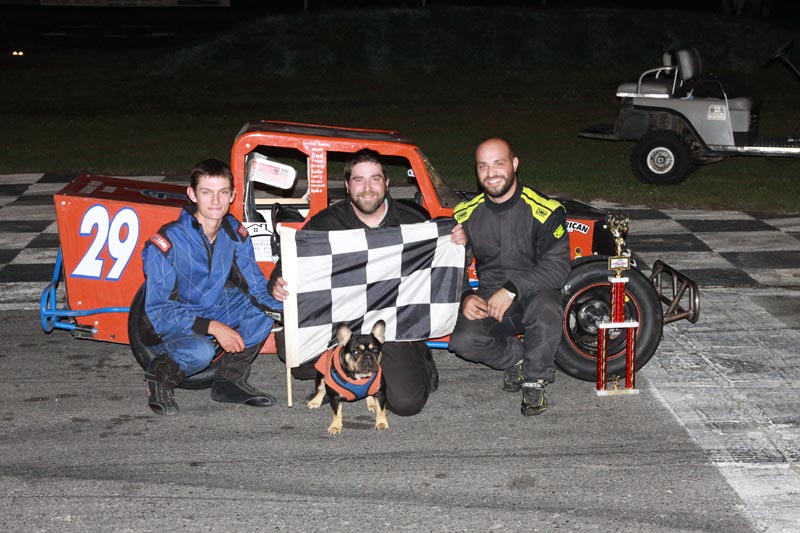 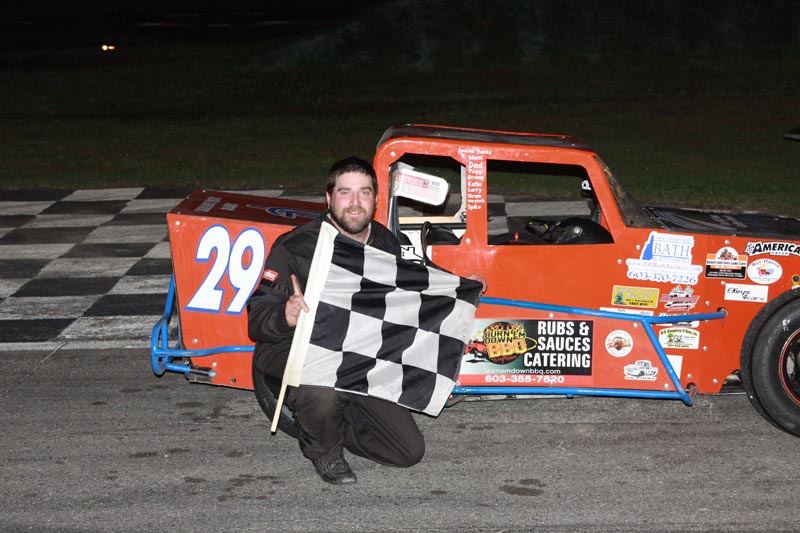 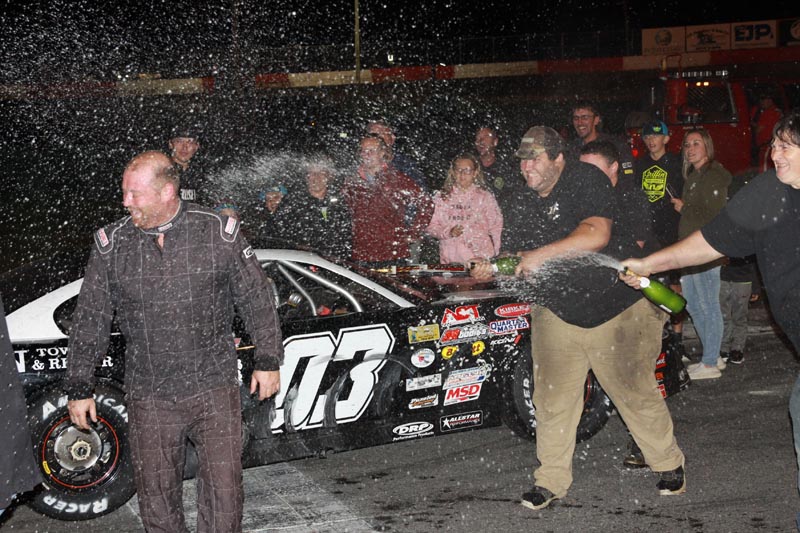 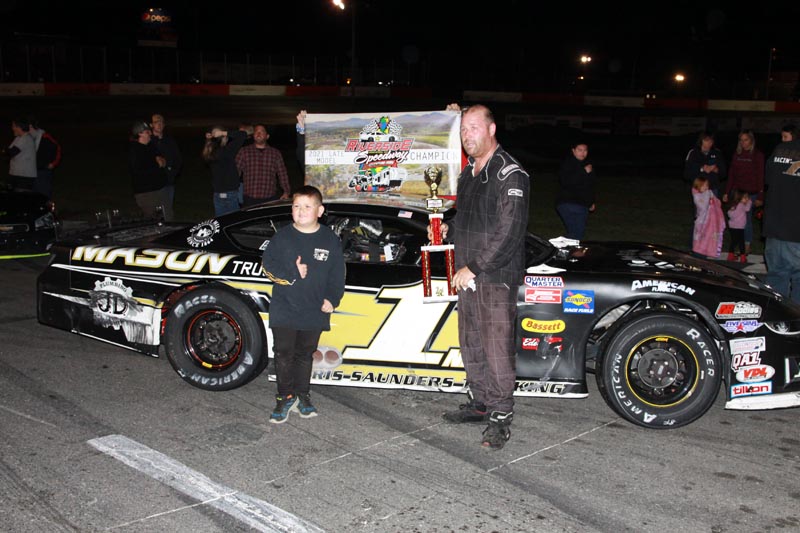 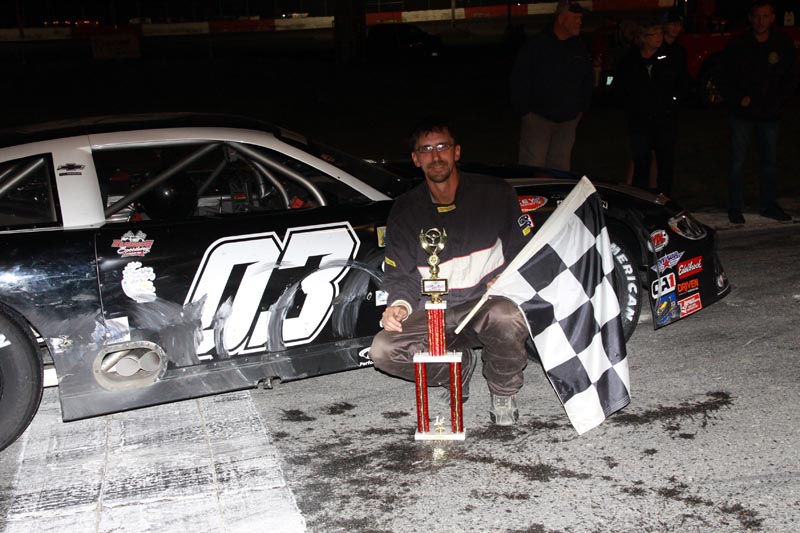 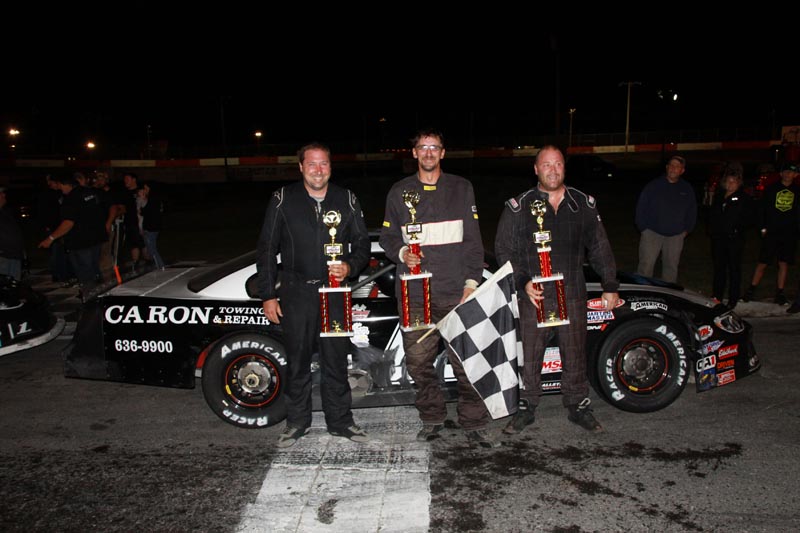 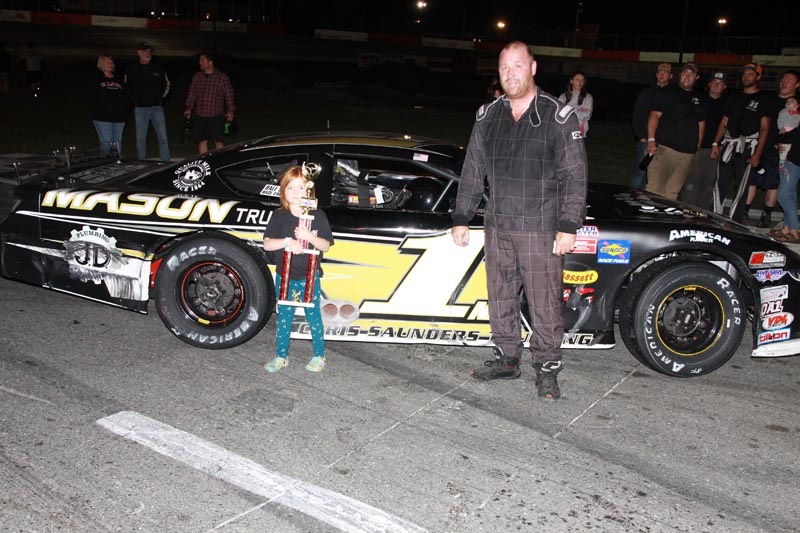